First off, I want you to know that this is NOT a how-to post. Actually, most of the posts about this duplex will NOT be because I am not personally building it, just helping out. And because of that, I thought it would be nice to share what goes into building the foundation and walls of a duplex. And just so you know a lot of this is what goes into building a house.

So remember this is NOT a how-to and I am just sharing things I have learned about the building process. 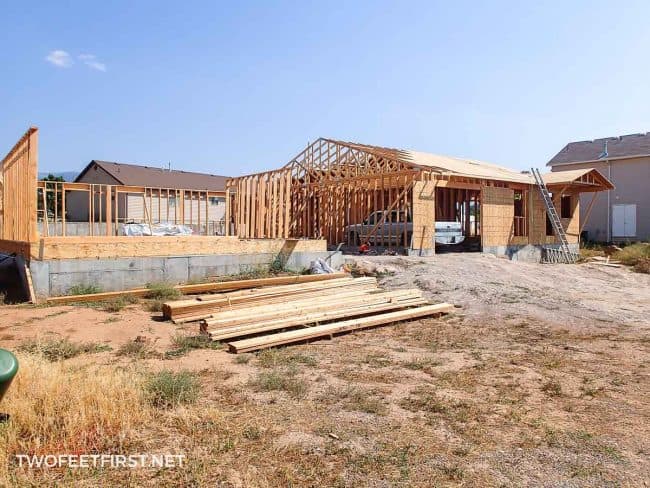 WHAT GOES INTO BUILDING THE FOUNDATION AND WALLS OF A DUPLEX?

Before anything can happen you have to have a plan (aka: blueprint). You will need an actual blueprint because it shows a lot of important details. This plan has to be approved by the city/county you will be building in.

SIDE NOTE: At different stages of the build, a city/county inspector has to pass-off the progress. So make sure you know those!

Once the plan has been approved, it’s time to start digging but there is more work than just that. I think this would be the part I would be most nervous about. 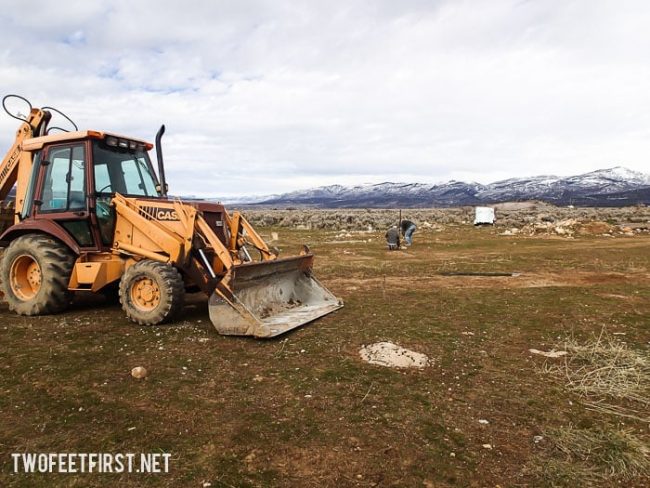 A foundation is one of the most important parts of a house/building because it transfers the load of the structure to the ground.

Before digging, you need to know where to dig. This is where your plans come into play. The digging will be where the footings of the foundation are placed then the sides are added after.

Things to NOTE about the foundation:

This summer, I got to experience forming walls after the footings cured. There is a reason this part of building cost so much and that is because it is very labor intensive. First, the forms are heavy because they are metal with wood (sizes vary but the standard is 1’x4, 2’x4′, 1’x8′, 2’x8′, and smaller pieces to fill in the gaps).

You have to spray each form with an oil so the concrete does not stick to the form (it still does but not as bad). Then they are attached together with more metal. Plus everything needs to be square, level, and follow the plans (you put a chalk line for this).

Then the concrete comes and you have to make sure it does not go above another line (there is more to the pour than this but we are being simple here!). After the concrete has set for 24+ hours, you then remove all the heavy forms, this time it’s easier!

And that is the simplified version of pouring a foundation. 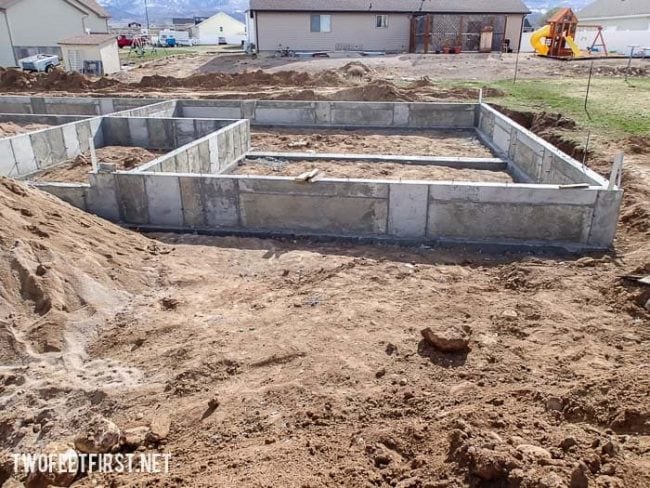 After the foundation has cured, the floor was added. Remember the bolts I talked about before, those come into play now. It’s time to add a sill plate along the concrete wall. Using 2″x6″ pressure treated boards (code for exterior walls here are 6″ thick) a hole is drilled wherever a bolt will be on the board. But before the board (sill plate) is added a plastic sealer is added then the board. Everything is then secured with a washer (this was a big square metal one) and nut. 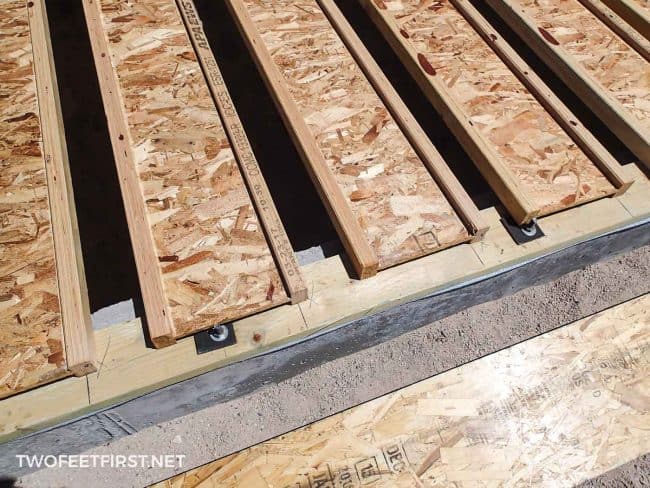 Next, the floor joists are added with a header joist on the outside. But there are things that have to be considered before: plumbing (shower/tub or toilet) and crawl space. This plumbing cannot be where a joist is.

After the joist are all installed the flooring is added. Normally a 3/4″ grooved plywood is used and it is staggered to help disperse the weight. An adhesive is used then the plywood is placed and secured with nails. You can see an example of installing a floor with our shed.

SIDE NOTE: Where the crawl space is the joist is cut and framed out plus the plywood was cut out. Looked like this after. 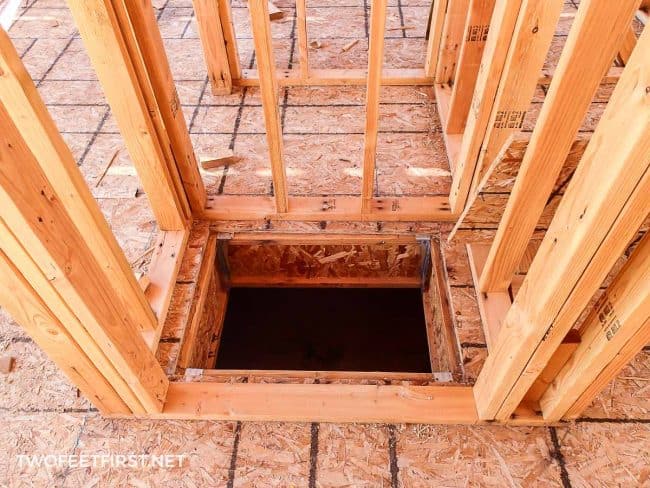 Once the floor is assembled, its time for walls! Here is an example of what a typical wall framing has. 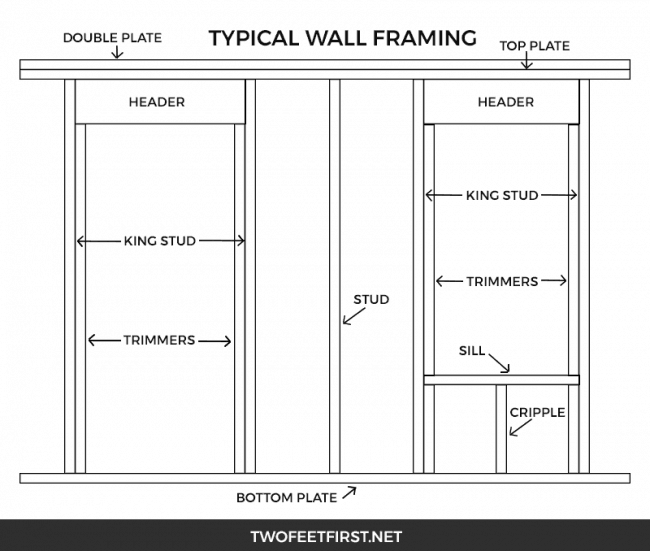 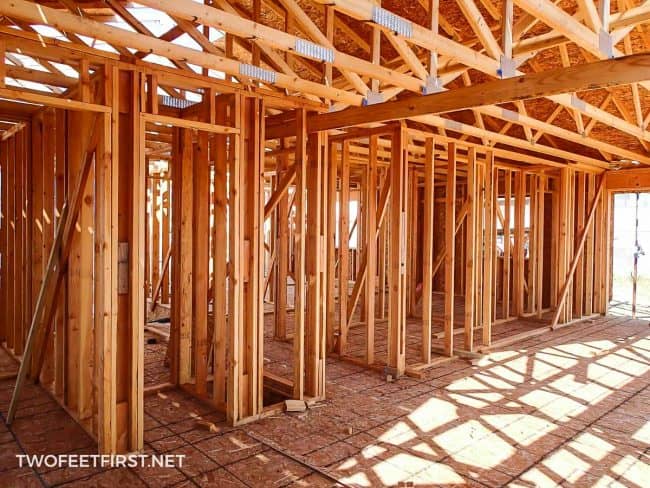 And that will do it for the simplified version of building a foundation and walls. Hope this will help you have a little understanding of how a house is built or a duplex! 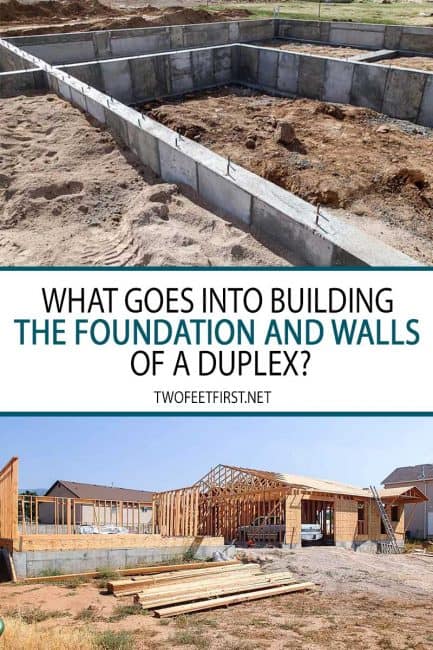 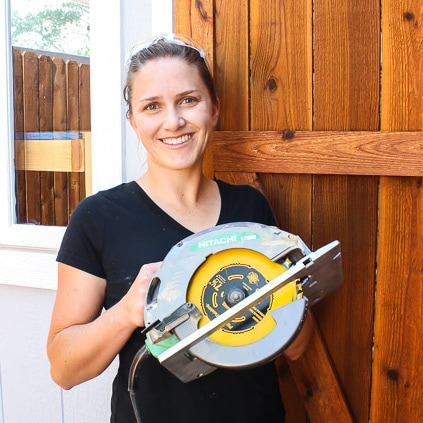 Hey there, I’m Megan! I am here to inspire you to makeover your home into something you can love by sharing do-it-yourself home projects and woodworking builds. Learn more about me.